It's a Doggy World 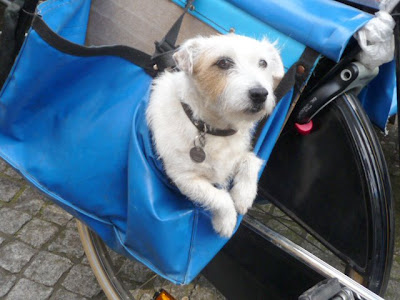 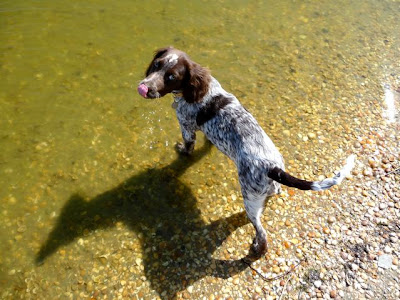 Since Pippa, my neighbour's pup, entered my life I've changed from being exclusively a cat lover into an occasional dog person. You meet people by meeting dogs. A few days ago I comforted the worried terrier in the top photo, whose master was briefly absent while buying a magazine. So I photographed the dog and the master mistook me for a tourist. Well, there's nothing like being a tourist in your own town.

As for Pippa, she's grown. Check out the entry of 15 April, when she was still quite tiny, with the leggy adolescent in the lower photo. 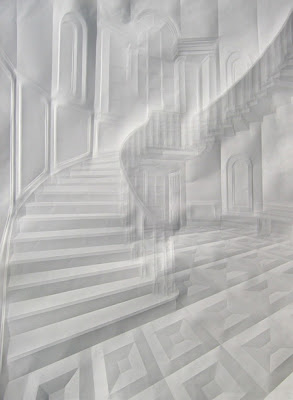 How I would love to swish up this staircase in a blood-red ballgown!

The artist Simon Schubert created this gorgeous illusion with a few careful folds in a piece of paper. 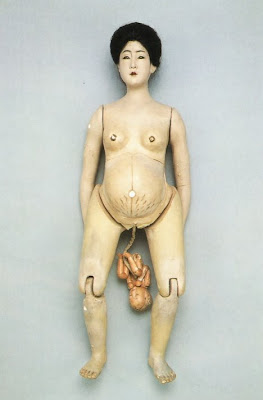 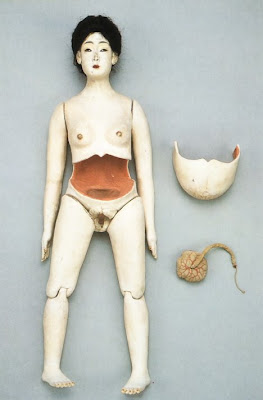 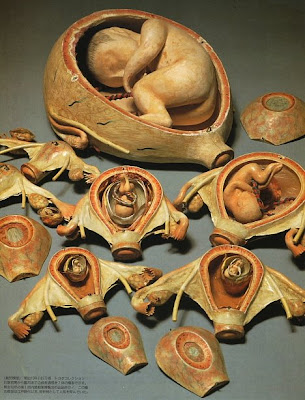 Complete with stretch marks and fetuses in various stages of development, these 19th century dolls were used to educate midwives and entertain the masses at sideshow carnivals in Japan.

Many thanks to Eagle-Eye Jane for spotting this gem.
Geplaatst door Annie Wright op 00:00 4 comments:

Email ThisBlogThis!Share to TwitterShare to FacebookShare to Pinterest
Labels: Dolls

Life Amongst the Weeds 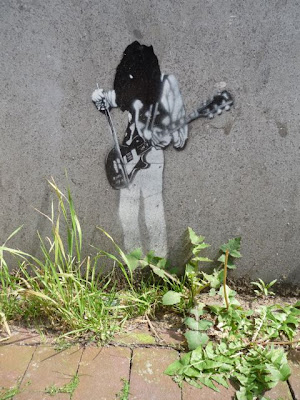 This experimental musician lives amongst the weeds in the centre of Amsterdam.
Photo: Annie
Geplaatst door Annie Wright op 00:00 2 comments:

See what you think of this this classic sequence of pix by the great American photographer Duane Michals.
Click to enlarge.
Geplaatst door Annie Wright op 00:00 2 comments: 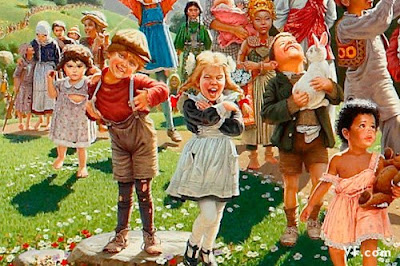 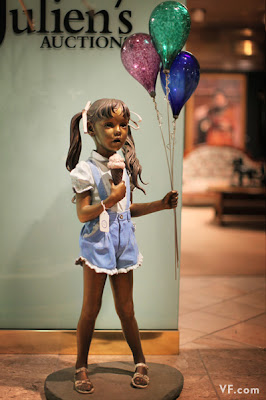 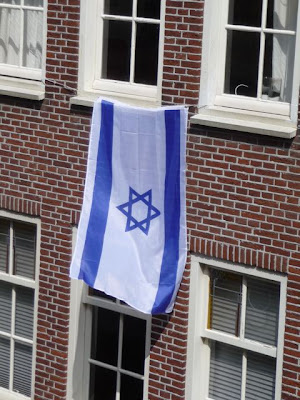 Some time ago, activist Gretta Duisenberg hung a Palestinian flag from her house in a posh district of Amsterdam. It didn't go down well with the neighbours, who are mainly Jewish. In response, an enterprising TV journalist draped an enormous Israeli flag across the entire roof of the Duisenberg residence, which effectively became an occupied territory. Eventually, all the flags were removed at the insistence of Gretta's husband Wim, who also happened to be president of the European Central Bank.

Now history is repeating itself in the street where I live. Someone from my block has hung a Palestinian from their balcony, which has been fluttered brightly for many weeks in the spring sunshine. Evidently it pissed one of my neighbours off mightily, and last Thursday night an Israeli flag suddenly emerged from a house on the opposite side of the street.

What would happen? Would this lead an escalation of hostilities?

No. The Palestinian flag promptly disappeared and has never been seen again!

Just four days after the Queen's Day attack, Queen Beatrix attended the annual Dutch Memorial Day ceremony in the centre of Amsterdam. Needless to say she was completely professional, as was the beefed-up security with police vans blocking all the major roads leading to the vicinity. 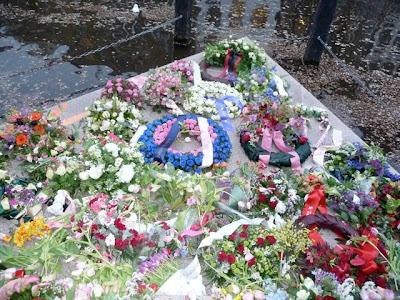 Later that evening I attended an event in memory of the victims of the gay and lesbian holocaust. Held at Amsterdam's much-loved Homomonument, it was also a show of solidarity against the rising tide of homophobia not only worldwide but also in Holland. Under a gentle snow of fluttering elm seeds, there was music, speeches and the laying of wreathes. Finally everyone was invited to place their flowers, and my friend Lidi graciously shared a bouquet of red roses with me.

But what of the security? There was indeed a raised police presence. And that was just as well because I discovered an abandoned backpack. Having lived through the IRA bombing campaign in London, I know that you should never trust a lost bag. So I approached the nearest policeman, who refused to do anything about it because he had to wait for an important message on his earpiece! In other words, despite the risk of impending disaster, orders are orders! 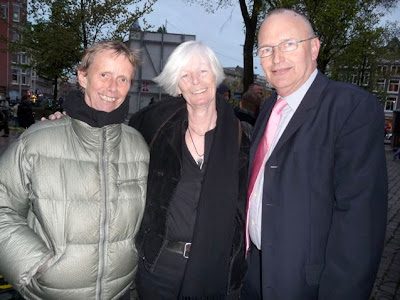 Seen after the event, from left to right, are Karin Daan, friend and the designer of the Homomonument, Masha, bus driver, and the event's presenter Menne Vellinga, who is also the former Chair of the Homomonument Foundation.
Photos: Annie
Geplaatst door Annie Wright op 00:00 2 comments:

Thursday morning at 6.45 am I was on the streets of Amsterdam and heading for the greatest street party in Europe: Queen's Day, the day when the Dutch turn orange and take collective leave of their senses. It's like your birthday and Christmas rolled into one. There are stalls everywhere so there are plenty of bargains to be had even if, like me, you're a demanding customer looking for virgin goods at pre-loved prices. But the best thing is the relaxed atmosphere, where you find yourself talking to complete strangers and admiring the sheer creativity with which people celebrate the Netherlands' much-loved Royal Family. Here, for instance, is Pino, looking every inch a regal pup. 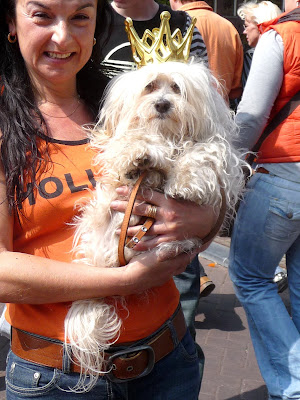 All that came to an abrupt end with the carnage in Apeldoorn, which millions saw live on TV.

Political assassination in Holland was once something that last happened hundreds of years ago with the killing of William the Silent in the late 16th century. But all that changed with the new millennium and the murders in quick succession of politician Pim Fortuyn and film-maker Theo van Gogh. Why? Why has this once relaxed and tolerant society become gripped by fear and paranoia?

And what of the famously accessible Dutch Royals? Will they become as remote as the House of Windsor? Will Queen's Day lose its point and its popularity? The first hint will come next Monday evening when Queen Beatrix attends one of the most public events of the year: the WWII memorial ceremony in the heart of Amsterdam.