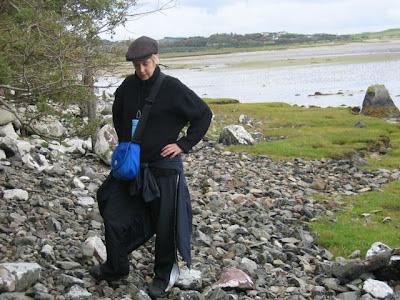 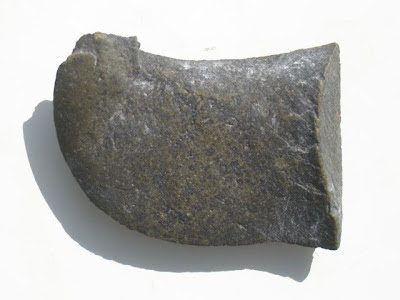 Treasure hunting on Ireland's beaches is a form of meditation where a glimpse of something ancient and unmistakably man-made stands out amongst the usual pebbles and detritus. This neolithic implement is my prize find although initially I was obliged to surrender it to the Irish nation when it was sent off to the National Museum in Dublin. Fortunately, the Museum didn't want it because it had enough examples of its own.
Photos: Bertje (top photo), Annie
Geplaatst door Annie Wright op 12:50 No comments: 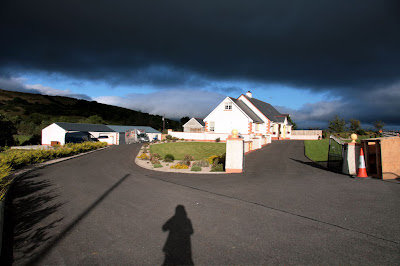 Back to Ireland where the elements are sometimes overpowering and humankind rather small.
Photo: Annie
Geplaatst door Annie Wright op 17:00 1 comment: 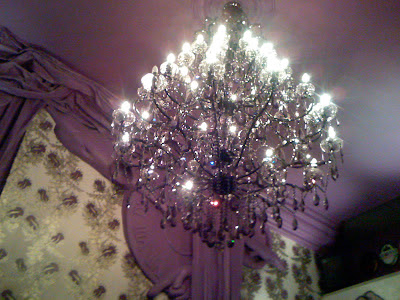 A glamourous moment in a fake but friendly bar. As Oscar Wilde said, "We are all in the gutter, but some of us are looking at the stars."
Photo: Annie
Geplaatst door Annie Wright op 08:04 No comments: 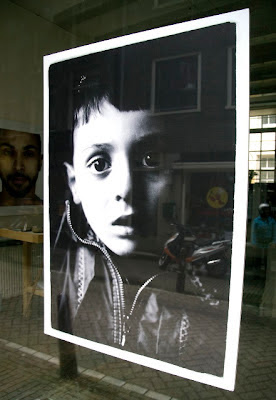 This is not a child. It is a portrait printed on paper and suspended in a shop window on Amsterdam's Binnen Bantammerstraat.But amidst the reflections, media and clutter, the child's steady gaze remains. 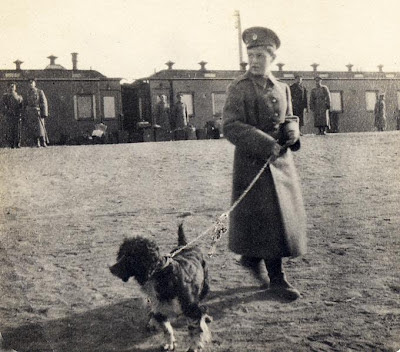 It is 90 years ago today that Tsar Nicholas II, his family and servants were murdered in Ekaterinburg, Russia. The Tsarevitch Alexei was amongst the victims but his dog Joy (pictured with him above) was found after the killings, starving and alone.

Eventually Joy was brought to England where she lived out her days in Windsor. They say she missed Alexei to the end.
Geplaatst door Annie Wright op 11:47 No comments: 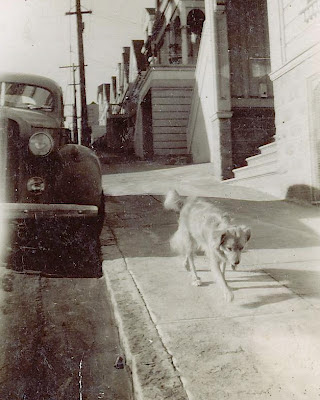 This is a dog who lived more than 70 years ago in San Francisco. His name was Rascal and he belonged to my grandfather's family. In the picture, Rascal is on a doggy mission, following interesting scents of enquiry. Although the family had more than its fair share of troubles, Rascal is clearly a much-loved pet, and there are many photos of him looking sleek and well-fed.

I often think of Rascal and about how even when love goes wrong between humans, an animal can still be adored unconditionally.

This story has a curious postscript that happened some months ago when Rascal was very much on my mind. I was crossing a busy junction near Amsterdam's Central Station when I saw Rascal or his identical relative. He was alone and dodging the rush hour. Terrified that he would be crushed beneath the traffic, I struggled to reach him but failed. Now far ahead of me, Rascal snaked between the tyres, playing canine Russian Roulette with infinite good fortune. Then suddenly I lost him. Taking his chances, he had vanished into the city and was gone.
Geplaatst door Annie Wright op 11:38 No comments:

Email ThisBlogThis!Share to TwitterShare to FacebookShare to Pinterest
Labels: Ephemera

The Little Palace on Palace Street 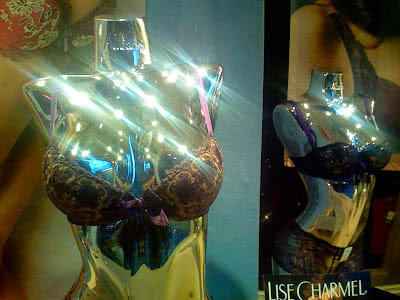 Palazzina on Amsterdam's Paleisstraat is the place to liberate the inner courtesan, bond with your favourite girlfriends and have the assistants size up your tits at a single glance.
Photo: Annie
Geplaatst door Annie Wright op 12:47 No comments: 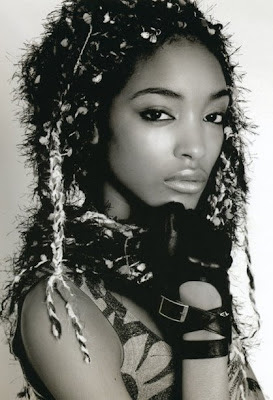 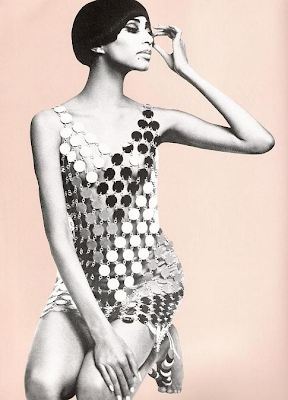 The July issue of Italian Vogue exclusively features black models in reaction to the fashion industry's reluctance to use them as cover girls because they "do not sell".

Star shutterbug Steven Meisel has photographed many of the greats including Naomi Campbell, Iman, Tyra Banks, Liya Kebede, Alek Wek and Pat Cleveland. And also newcomer Jourdan Dunn (top photo), who was discovered in Primark, the British cut-price temple for the fashion greedy. She reminds me slightly of Donyale Luna, the aristocratic 60s legend/wild child.

No doubt Vogue will be accused of tokenism but it makes a pleasant change from the current crop of white models who tend to all look alike.
Geplaatst door Annie Wright op 07:31 1 comment: 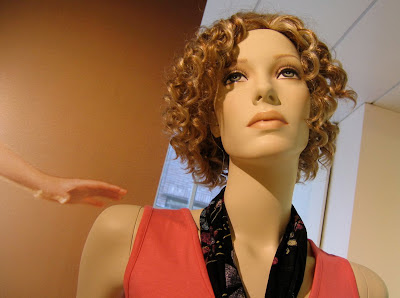 The End of the Fairytale 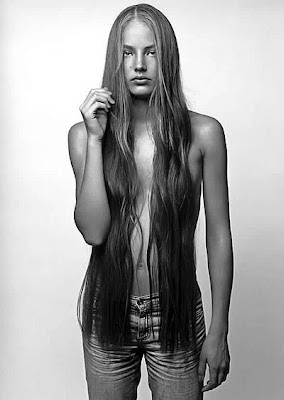 Like a fairytale, teenager Ruslana Korshunova was rescued from obscurity in Alma Ata (Kazakhstan) by a fairy godmother/fashion agent who launched her on a career of runway shows and magazine covers. Yet despite travelling the world, this "Russian Rapunzel" felt lost and confused. This weekend, she fell to her death from the window of her ninth floor apartment in Lower Manhattan.
Geplaatst door Annie Wright op 07:19 No comments: