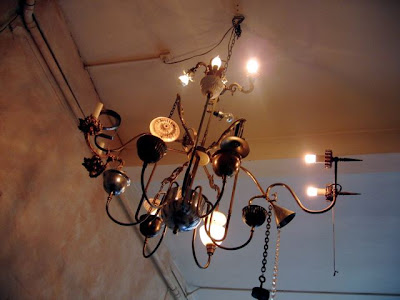 A chandelier, designed and constructed by my friend, the artist Claudio Goulart. It is made of the ancient bits of plumbing often found in rusty toffee tins on flea markets.
Photo: Annie
Geplaatst door Annie Wright op 10:06 3 comments: 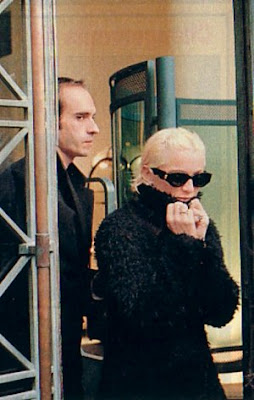 I'm not a fan, I just watch Madonna constantly from a distance. Nor am I an admirer of the slightly trite erotica of the photographer Bettina Rheims. Yet the man's sly glance and the star's faintly seedy glamour are entrancing.
Photo: Bettina Rheims
Geplaatst door Annie Wright op 00:00 2 comments: 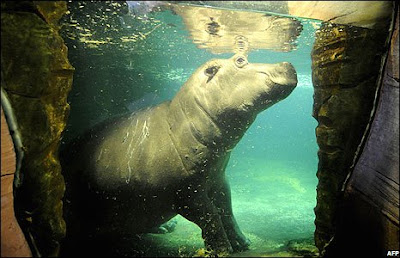 I love hippos, partly because my beloved's travel company is called the Flying Hippo and partly because they are such deliciously absurd creatures. This graceful baby is enjoying a dip at Hannover Zoo.
Geplaatst door Annie Wright op 00:00 2 comments:

Email ThisBlogThis!Share to TwitterShare to FacebookShare to Pinterest
Labels: Animals 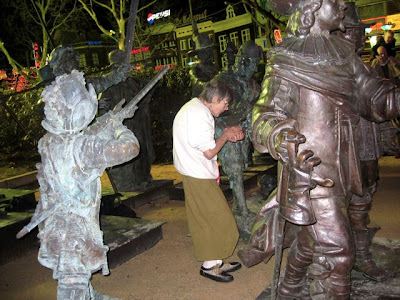 Some time ago, I attended the launch of a group of bronze figures depicting Rembrandt's "Night Watch". Champagne flowed and local politicians strutted their stuff. Suddenly I noticed this lady wandering between the statues. What is she holding in her hands? A mouse, a feather, a butterfly?
Photo: Annie
Geplaatst door Annie Wright op 00:00 1 comment: 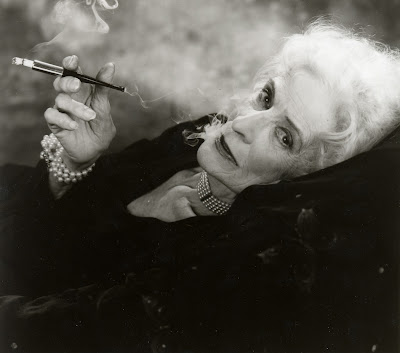 Mimi Weddell's husband died when she was 65, leaving only unpaid bills and loving memories. Undaunted, she decided to become an actress/model. Over almost three decades, she has appeared in everything from "Sex and the City" and vampire movies to cheese commercials. Now 93, her life is being celebrated in the documentary "Hat's Off", which is available on DVD.

Women like Mimi are all too frequently belittled with comments such as "she must have been beautiful in her youth". I'm sure she was quite lovely but - with her combination of glamour, aquiline good looks and sheer gutsiness - what she has become is altogether more extraordinary.
Geplaatst door Annie Wright op 00:00 10 comments:

The Ultimate in Androgynous Chic 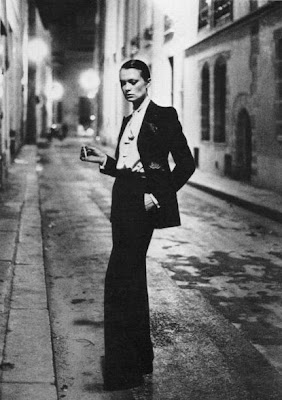 This photograph is shot from my favourite seat in my favourite café: the Luxembourg in Amsterdam. It is where I come for espresso and to lose myself in the latest issue of French or Italian Vogue. Haute couture and the Luxembourg's golden light ensure that I am transported to another time and place: not here, not now.
Photo: Annie
Geplaatst door Annie Wright op 00:00 5 comments:

Your Majesty, Your Royal Highnesses, Excellencies, Ladies and Gentlemen... 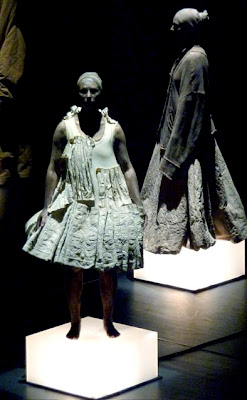 Last Wednesday, the Prince Claus Awards for culture were presented in Amsterdam at a lavish ceremony attended by the Dutch royal family, leading politicians and sundry plebs like myself. I was there because I'd translated most of the speeches. Hearing them read is a curious sensation: the content belongs to the original authors; the words are mine. It's a bit like dressing up in someone else's clothes: strange and slightly sexy.

One of the Awards went to the Chinese fashion designer Ma Ke. Her work is based on the Zen-like notion that clothes are imbued with memory. I agree with her entirely, although my experience is rather more along the lines of "If this frock could talk, I'd really rather it didn't!"
Photo: Annie
Geplaatst door Annie Wright op 00:00 5 comments: 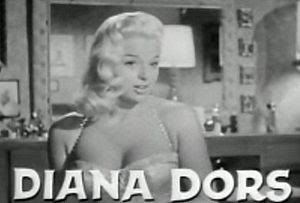 Diana Dors was a lovely lady with a great sense of humour, especially concerning her original surname. According to her autobiography, she was once asked to open a church fête in her home town of Swindon, England. Before the event, she lunched with the vicar and informed him that her name was really Diana Fluck. The vicar became somewhat agitated about his speech and the risk of mispronouncing "Fluck". But when the moment came, he introduced Diana with the following immortal words: “Ladies and gentlemen, it is with great pleasure that I introduce to you our star guest. We all love her, especially as she is our local girl. I therefore feel it right to introduce her by her real name; Ladies and Gentlemen, please welcome the very lovely Miss Diana Clunt!"
Geplaatst door Annie Wright op 00:00 6 comments: