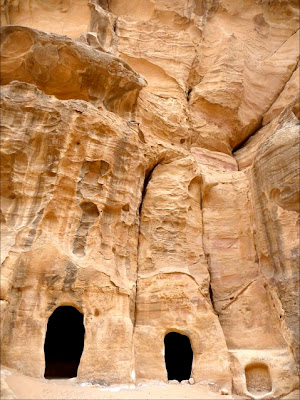 ...these man-made cave dwellings dug into the soft sandstone of Little Petra, a suburb of its famous big sister and a crossroads of ancient caravan routes.

Photographed by me a couple of weeks ago when I visited Jordan.
Geplaatst door Annie Wright op 00:00 1 comment:

Are You for Real? 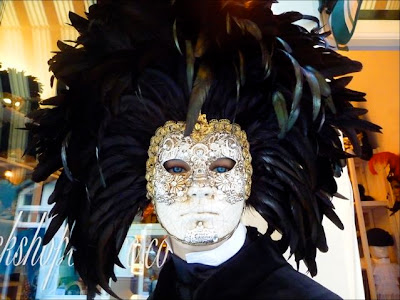 Is this a handsome young man kitted out for the Venice Carnival or just a lifeless shop front dummy?
Photo: Annie. Click to find out.
Geplaatst door Annie Wright op 00:00 No comments: 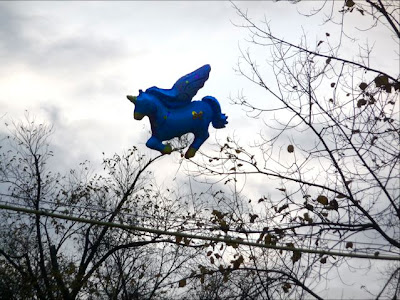 Last week, this lonely Pegasus was spotted high above the Saturday shoppers in the heart of Amsterdam. 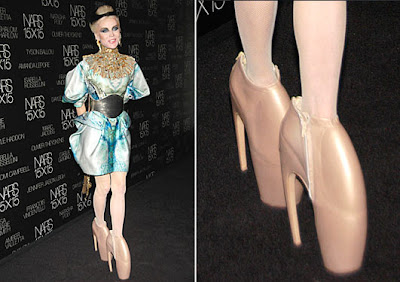 I'm interrupting the reports of my recent adventures in the Middle East with the breaking news of an alien sighting in NYC. No not really. It's fashion diva Daphne Guinness, who is related to both the brewing family and the formidable Mitford girls. Daphne is clad in head to toe Alexander McQueen including the famous (or infamous) "Alien Shoes". God knows what her feet looked like the next morning!
Geplaatst door Annie Wright op 00:00 6 comments:

Email ThisBlogThis!Share to TwitterShare to FacebookShare to Pinterest
Labels: fashion 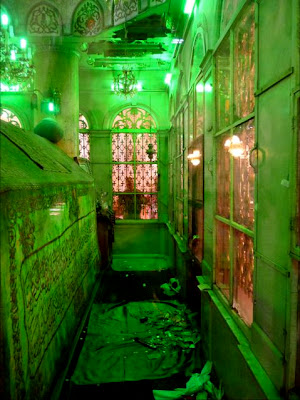 Even after being decapitated John the Baptist certainly managed to get around. Or at least his head did. It is rumoured to be located in places as varied as Rome, Antioch, Munich and even Halifax in Yorkshire. However, the people of the Umayyad Mosque in Damascus are quite certain that they have the real thing and have built it a shrine of emerald splendour.

The Umayyad Mosque also houses a niche where the head of Huseyn ibn Ali, grandson of the Prophet Muhammed, was displayed by the caliph who had him executed. According to Islamic texts, "the Heavens and the Earth wept only for two people: John the Baptist and Husayn ibn ‘Alī".

A Warm Welcome in Damascus 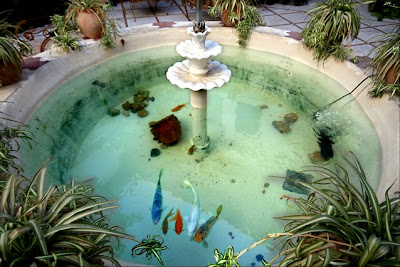 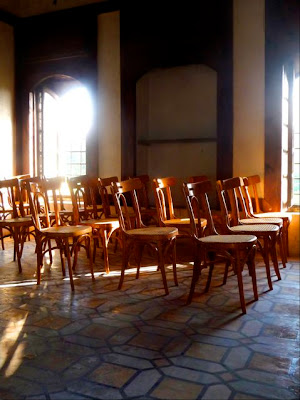 An empty lecture room in the lovely al-Azm Palace in Hama, Syria. It seems so serene, a place where wise people may contemplate subjects such as the perfect, exquisite void of the number zero that was discovered two-and-a-half thousand years ago by the Babylonian mathematicians in what is now Iraq.

The Palace has also seen more than its fair share of trouble, and was extensively damaged in 1982 when the Syrian military bombarded the city in an action against the Muslim Brotherhood, which resulted in possibly as many as 40,000 deaths. 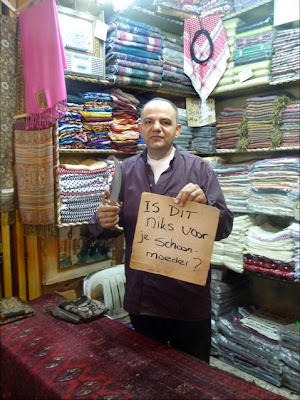 A couple of weeks ago I met this man in the souk in Aleppo, Syria. Apart from the ferocious looking knife, he is holding a sign in Dutch that reads: "Is this something for your mother-in-law?" From the look on his face I get the distinct feeling that he's not joking...
Photo: Annie. Click to enlarge.
Geplaatst door Annie Wright op 12:22 3 comments: